Hello to anyone listening!

With the end of the LowRezJam2021, I wanted to summarize some closing thoughts on TRYH4RD, and also shout out some games I loved from this jam. I'm also working on a technical post-jam blogpost and a post-jam version of TRYH4RD, but those might take a little longer.

I'm a little blown away by the positive reception for this game. I only ended up receiving 22 ratings, but those ratings were enough to push TRYH4RD to the top of the results.

This is definitely the best I've ever done in any gamejam. Previously, I think the highest I've placed was 4th in "Humor" in Ludum Dare, and overall the best I've done is top 100 in the GMTK 2019 gamejam. I've been making games and doing gamejams for over 5 years now, so I've definitely had a lot of jam experience.

But I did not expect 1st in gameplay and 2nd overall. I'm surprised that people gave visuals such a high score as well, but I think part of that is the fact that the 64x64 restriction covered up a lot of my artistic inexperience.

If you're reading this and you played TRYH4RD, thanks so much for playing! I really can't believe the game was so positively received, so thank you to everyone who played and left comments!

Shoutouts for games I loved

I played 40 games this gamejam. Not a ton, but not a very small amount either. I genuinely enjoyed my experience with every single game I played, but I wanted to shout out a few games that made an impact on me. 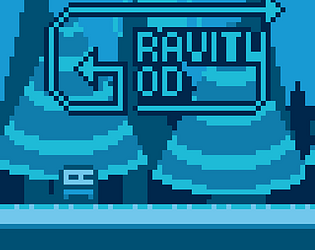 I think this was my favorite game of the jam. The game can err on the frustrating side sometimes, but I love the core concept and the execution feels so complete. The game's core mechanic is that the direction of gravity changes to the beat of the music.

The game starts off simple, alternating between "up" and "down" gravity on the beat, but eventually builds on this mechanic by having the gravity change directions to "left" "right". Without spoiling too much, the game deeply explores its core mechanic, squeezing every ounce it can from it. Despite dying 98 times, I finished it and loved every second of it.

This game was criminally underrated. That's not to say it did poorly in the jam, but I really thought I'd see this game somewhere at the top of the results. This game pulled me in like no other. It's a game that plays a little like a point-and-click adventure, but the design of the map and the way the gameplay slowly oozes out is superb. The game is full of mystery but it slowly teaches you where to go and what to do through hints. I also love the way the game feels to play, like interacting with the buttons on the bottom.

The game has sparse, short, written clues on where to go next, which is a refreshing change of pace compared to modern games that 'mark things on your map' whenever you progress the story. The game plays out like a puzzle but the combat is engaging enough to get your blood pumping. I loved discovering each aspect of this game, so if you like point-and-click adventures, I highly recommend this game. 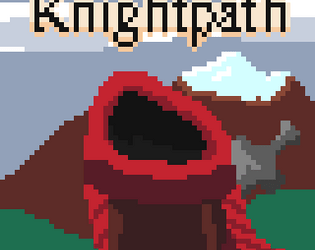 Knightpath is such a surprisingly deep metroidvania for a gamejam. The map is expertly designed to reward exploration (there's a fair amount of optional 'missable' content like HP upgrades!), and each new ability you unlock has multiple purposes in combat and exploration.

The game is quite long, and has some frustratingly placed checkpoints, but the platforming is tight and the abilities you unlock over time make you feel stronger and more agile. The game understands the metroidvania formula and executes it very well.

This game really scratched my "2010 flash game" itch. It plays a lot like the old school incremental 'launcher' games, where you launch from some platform, see how far you get, and then try again after upgrading your character.

This game reverses the formula though, having you fall from the sky, trying to use your jetpack intelligently to avoid splattering on the ground. The game is simple, but it felt really addicting to me. I loved getting money from each run, upgrading my character, and doing another run. The game also has an awesome, slightly spooky, surprise at the end.

This was the tightest, fastest platformer I played this jam. It's got a little bit of everything: Some metroidvania elements (obtaining new abilities for traversal and combat), some platforming, and boss fights! It felt like one of those 'complete package' games. The music was solid, the platforming is tight, and the boss fights are fun and interesting. The timer adds a bit of replayability, as I played it a few times to try to get my time as low as I could.

This was probably my favorite jam I've done so far. I might be biased since it's also the most successful I've been in a jam, but I think my favorite thing about this was the size of the jam. Ludum dare and GMTK game jams are great, but they can feel a little overwhelming. Usually there are 4000 + entries in those jams, so you rarely see the same person again after playing their game.

Since this jam was only 340 entries, it felt like I ran into the same people over and over again in the comments. I'd read a comment, play their game, and then see them throughout the jam. It felt like I was running into new friends everywhere! I connected with way more developers this jam than I ever have.

I also liked that this jam was spread out over 2 weeks. In the end, I spent about 40 hours on my game, but it was spread over 2 weeks so it never felt like I had to compromise on my health for this jam.

Anyway, thanks a ton for reading!

Really interesting, especially about doing a jam and not sacrificing yourself for it (48 hour jams are a pain). I'll probably keep that in mind when I pick a jam to be in. Oh and about the games you talked about, I'll play them as soon as I can! Really exited about the gravity one.

Thanks for stopping by! Yeah I 100% recommend doing a jam that doesn't require submitting your mortal soul, the 48 hour jams burn me out for months. These games are great, definitely give them a try!

Your game was great, and definitely deserved its ranking!! Super good job, and I'm happy tryh4rd was one of the first games I played in the jam :)

My favorite part of the jam was the community aspect too. I'm still new to the gamedev community, and Don't croak was my fourth game ever, so it was so much fun getting nice comments and finding new game devs to follow!

Excited to see what you make next -Mopi

Thanks a ton! I loved Don't Croak and I'm glad it was one of the first games I played this jam too!